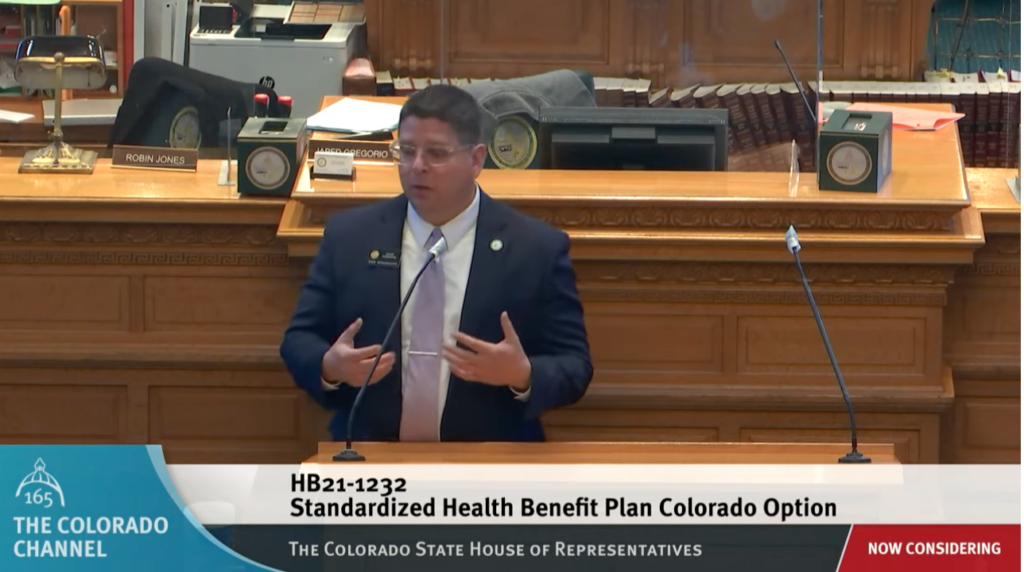 Yesterday the Colorado House of Representatives debated HB 1232, the public option proposal, into the early hours of Friday morning. The measure passed on second reading with a series of amendments after more than nine hours of debate, which ended around 2:30am.

While the amended version of the bill no longer includes a state-run insurance plan, the proposal requires insurers to offer individual and small group plans directed by the state and sets significant caps on premiums for those plans. This amended version of the bill still raises cost-shifting concerns for employer-sponsored insurance and imposes excessive fees on hospitals.

Other significant changes from the introduced version include considering medical inflation as a variable in health plan costs, reducing the premium reduction target from 20% over 2 years to 18% over three years, and setting rate floors for hospitals and physicians.

A similar model to HB 1232 was recently adopted in the state of Washington, which went on the market late last year. Like the Colorado option, Washington’s plan requires private insurers to offer a standardized plan directed by the state to the individual market and uses rate-setting to dictate prices.

So far, the plan has done little to lower premiums in Washington.

One factor in the Washington legislation is that some of the largest insurers have decided not to participate in the plan. To address that issue in Colorado, HB 1232 makes participation mandatory – which raises legal concerns with many stakeholders.

The Colorado Chamber remains in an opposed position to HB 1232 and our members have reached out to targeted legislators in the House to raise their concerns.

If you have any questions about the amended bill, please contact Katie Wolf at kwolf@cochamber.com.

Using the Colorado Chamber’s grassroots tools, each member of the Judiciary Committee received more than 70 emails from our members opposing the bill, and the bill has been laid over in committee for over a month as sponsors have tried to address these concerns. The Chamber has also led an active coalition of more than 50 private and public entities opposed to the original bill.

Furman testified on behalf of that coalition, along with coalition members Sarah Mercer representing the Denver Metro Chamber of Commerce and Ann Terry, executive director of the Special District Association of Colorado.

While the amended bill is a significant improvement from the introduced version, the Colorado Chamber still has several concerns about the language, including the overly broad definition of “harassment.”

“The level of elements to determine whether harassment exists is too broad and we feel that a more refined approach is important for when the courts, plaintiffs and defense counsel are understanding these cases,” Furman said in her testimony.

Furman pointed to the General Assembly’s own internal policy on workplace harassment, which applies to lawmakers, staff, lobbyists and volunteers in the legislature. Among other things, this policy requires that the conduct at issue be “severe and pervasive,” in order to be considered harassment.

“If everyone who works in this building is required to live by this standard, the first step in reforming and addressing workplace harassment would be to apply the same standard to the rest of the private and public sector,” Furman added.

Other aspects of the amended bill remain problematic, including language that assumes employers are bad actors and applies unreasonable punitive damages to businesses for failing to comply with certain provisions of the bill. SB 176 passed the Senate Judiciary Committee and has been referred to the Committee on Appropriations.

Due to the recent COVID-19 pandemic, the last several months have had a significant impact on businesses in the downtown area of Denver.  According to the Downtown Denver Partnership, approximately 250,000 people were downtown every day prior to the pandemic, and that number dropped to 50,000 in 2020.

This has impacted local businesses such as restaurants and retailers that normally see thousands of people every day.  Mayor Hancock also stated during a press conference that it has disproportionately affected women and people of color.

In response to this concern, and in an effort to re-energize businesses and the downtown area, more than 150 businesses have joined the “Denver’s Ready” coalition and have pledged to begin transitioning workers back to downtown Denver offices starting May 10th.

To learn more about this effort or to join the coalition, sign up here: Denver’s Ready initiative or contact the Colorado Chamber if your business would like to get involved in this effort.

Read More in the Denver Gazette.