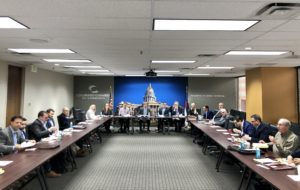 The Colorado Chamber’s Labor and Employment Policy Council today held its first meeting in anticipation of legislative session, which begins in January. The Council heard from speakers from the Colorado Department of Labor and Employment (CDLE), discussed pending legislation impacting business, and welcomed its new Chair, Daniel Combs of Campbell Litigation

Barelo and Patrick Teegarden, CDLE’s legislative liaison, have been helping facilitate the FAMLI Task Force discussions and provided an overview of the process for the Council. The Task Force will provide a report to the Legislature and Governor in January outlining options and recommendations for what a family and medical leave program should look like in Colorado.

Teegarden emphasized that regardless of how the Task Force ultimately votes, the report will include all options considered by the Task Force – including a potential private party option outlined by Pinnacle Insurance last month. Pinnacle’s proposal was modeled on the state’s existing worker’s compensation program, in which the state mandates that employers provide a certain level of core benefits that are then provided through a private insurer.

Scott Moss, Director of CDLE’s Division of Labor Standards & Statistics, addressed Gov. Polis’ recent overtime proposal, which would raise the state’s minimum exempt salary threshold starting next year. Colorado Chamber members have expressed several concerns over the proposal, including its rapid implementation timeline in the middle of the calendar year, the administrative burden of such a change, and whether the minimum exempt salary level is appropriate statewide.

The Council also discussed legislation that is expected to be filed in the upcoming legislative session that will impact labor and employment in Colorado, including bills on employment discrimination and data privacy.

The next Labor and Employment Policy Council meeting will be held on January 22, 2020.