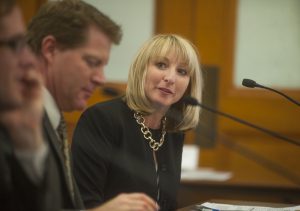 Legislative Democrats will introduce a retooled paid-family-leave bill later this week that requires businesses to pay half the cost of a proposed mandatory statewide program and to reinstate anyone taking as many as 16 weeks of leave to the same position when they return to work.

Business leaders have engaged in several months of discussions over details of the bill, whose previous iterations have failed four times in the past five years, typically at the hands of Republicans who controlled the Senate up until this year. Many business organizations expressed frustration this week, however, at what they viewed as sponsors’ unwillingness to consider their concerns about the costs of the program to small companies in particular, the broad eligibility for the program and the role of the state government — rather than individual employers — in reviewing and approving requests for leave under the potential new law.

Loren Furman, senior vice president of state and federal relations for the Colorado Chamber of Commerce, noted that of the five other states that have enacted a similar program, four of them fund the program completely based upon fees on workers. And the fifth, Washington, requires employer contributions only for medical leave and requires that family leave expenses come solely from employees.

Both Furman and Bommer noted that the federal Family Medical Leave Act, which requires employers to give 12 weeks of unpaid leave to workers dealing with personal or family health issues, applies only to companies of 50 or more employees, while the state proposal affects any company with a single employee on its payroll.

“It’s a significant cost for them, especially the smaller and mid-sized employers,” she said. “We’re disappointed that we’ve reached a point where the concerns that we’ve raised over and over again, the majority have not been responded to.”