“I feel that my input on the Enterprise Zone Reform task force helped shape Colorado policy. The Colorado Chamber and its partners did a great job involving me and then standing up for a reasonable outcome that was at risk until the very end when HB 1142 was passed.”

The Colorado Chamber and over twenty-five business organizations, trade associations, higher education institutions, local chambers of commerce, trade associations, and individual companies opposed this bill as introduced and emphasized that while the goal of SB 85 is commendable, several provisions raised serious concerns for the business community.

Colorado employers testified to some of the problematic provisions of the bill, including the creation of a new private right of action, discrepancies between the bill and the federal Equal Pay Act, the posting requirements for employment opportunities, the ability of employees to volunteer their prior salary to negotiate for a higher wage, and the six-year back pay and record-keeping requirements of the bill.

Loren Furman, Senior Vice President of State and Federal Relations with the Colorado Chamber, also testified on the bill and echoed the concerns of the Colorado business community. She strongly underscored the costly consequences of creating a new private right of action against an employer, which would only encourage a litigious environment between employees and employers. A more effective process, she said, would be to encourage an administrative process to resolve issues through an entity like the Colorado Civil Rights Division before taking them to court.

Furman also applauded the overall goal of the bill and hoped to work with lawmakers to ensure that any new law actually results in good policy. “It’s always in the employer’s best interest to have strong working relationships between an employer and an employee, to treat them equally,” she said.

Ultimately, through the tremendous help of Chairman Pete Lee (D – El Paso), and agreement by the sponsors, the committee passed the bill with several amendments that improve the bill significantly:

SB 85 will now move on to the Senate Appropriations Committee and the Senate Floor for consideration. 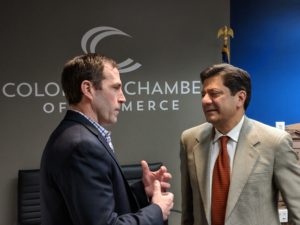 On Tuesday, the Chamber’s Federal Policy Council hosted Congressman Jason Crow (D-CO-6) to kick off the 2019 Fed Council’s exciting schedule.  Crow rose to office among one of the largest and most diverse classes of U.S. House freshman in more than five decades, and Tuesday was a great opportunity to hear his perspective on how he’s settling in, his priorities in Congress and what the next year could look like.

Crow identified the top business issue before Congress as a likely bipartisan and bicameral infrastructure investment package – and his belief that infrastructure cannot be just roads and bridges, but universal access to internet, true investment in communities, and prioritizing dollars and research, rather than small percentages of tax dollars going to each state.

Attend a Council Meeting and Hear from our Guest Speakers

Policy Councils are at the core of the Colorado Chamber’s work and provide an opportunity for dialogue between our members, key legislators and state agency leaders. Influential guest speakers for upcoming councils are listed below.

Please visit our online calendar for a complete list of council meetings.