At last, after more than four months of debate, the General Assembly yesterday gave final approval to a compromise version of SB-1, the session’s major transportation-funding bill, which sends it to Governor John Hickenlooper for his signature.

In a nutshell, here’s what SB-1 will do to initially address the ten-year, $9-billion shortfall that has been identified by the Colorado Department of Transportation (CDOT):

In addition, the SB-1 transportation expenditure will come on top of $500 million that will be spent in fiscal year 2019-2020 because of a bill (detailed below) that the legislature passed year.

If ballot proposals are not approved this November or in November 2019, then the bottom line is that SB-1 will have directed $1.645 million to transportation over the next 22 years, with $645 million of that being spent in the next two fiscal years.  Add to that the $500 million from last year’s legislation, and the total is $1.145 billion.

The projected need by CDOT for adequate funding, however, for the next two decades is $20 billion.

Consequently, the SB-1 expenditure and the $500 million authorized by last year’s legislation amounts to only 5.7 percent of the amount of money needed to address the state’s transportation needs over the next two decades.

When the thicket of the bill’s provisions is cleared away, the fact ultimately emerges that only $50 million per year will be new money.  The rest of the funding comes from existing dollars or prior legislation.

“Although we applaud the legislature’s hard work and bipartisan effort that resulted in passing SB-1,” said Loren Furman, CACI Senior Vice President, State and Federal Policy, “it’s clear that there remains a huge funding gap in transportation that must be filled.  We at CACI, the Colorado Chamber of Commerce, will now wait to see if a citizen-initiated, transportation-bonding proposal qualifies for the November ballot and then analyze it to determine our position.”

In the end, the voters may face the choice this November or in November 2019 whether a major investment beyond SB-1 will be made to address Colorado’s pressing transportation challenges.

The Votes and Politics of SB-1

The House approved its version of SB-1 on final, Third Reading by a strictly partisan vote of 36-to-29.

SB-1 probably totally satisfies few people—especially the legislature’s Republicans–who have called for a sustained, major investment in roads by the issuance of bonds to be paid from General Fund revenue to tackle the $9 billion backlog of work identified by CDOT.

The House approved the bill Monday on Second Reading on a voice-vote following  strong criticism by many Republican lawmakers who called for more General Fund money for roads but whose proposed amendments to do so were defeated by the Majority Democrats.

For the Democrats, the bill puts some General Fund money towards transportation while, from their perspective, it protects other parts of the state budget—high education, K-12 education, corrections and social services—from deep cuts when the state next goes into recession and, for the first time, it calls for asking the voters to approve bonding for transportation.

The Senate’s Original Version and Compromise Version: Where the Debate Began

The Senate-passed version, a compromise with the minority Senate Democrats, called for asking voters in 2019 to approve bonding of $3.5 billion for transportation, which would then be repaid with $250 million each year from General Fund revenues for 20 years.  (Later, it was reported by news media that some Democrats signed on to the bill to send it to the House to have it amended, not because they endorsed the Senate-version.)

The Senate Republicans’  introduced bill called for ten percent of General Fund revenues to be dedicated to paying off $3.5 billion in voter-approved transportation bonds.  In brief, the bill would have:

The bond-generated money would have gone for such major projects as expanding I-25 between Monument Hill and Castle Rock; expanding I-25 in northern Colorado; and expanding I-70 west in the mountains.

The Nuts and Bolts of SB-1, the Final Compromise

SB-1 is a bundle of contingencies wrapped in scenarios (see chart from the most recent Fiscal Note).  The bill’s provisions are complicated, and implementing some of the provisions will be contingent upon voter approval of bonding measures either this November or November 2019. 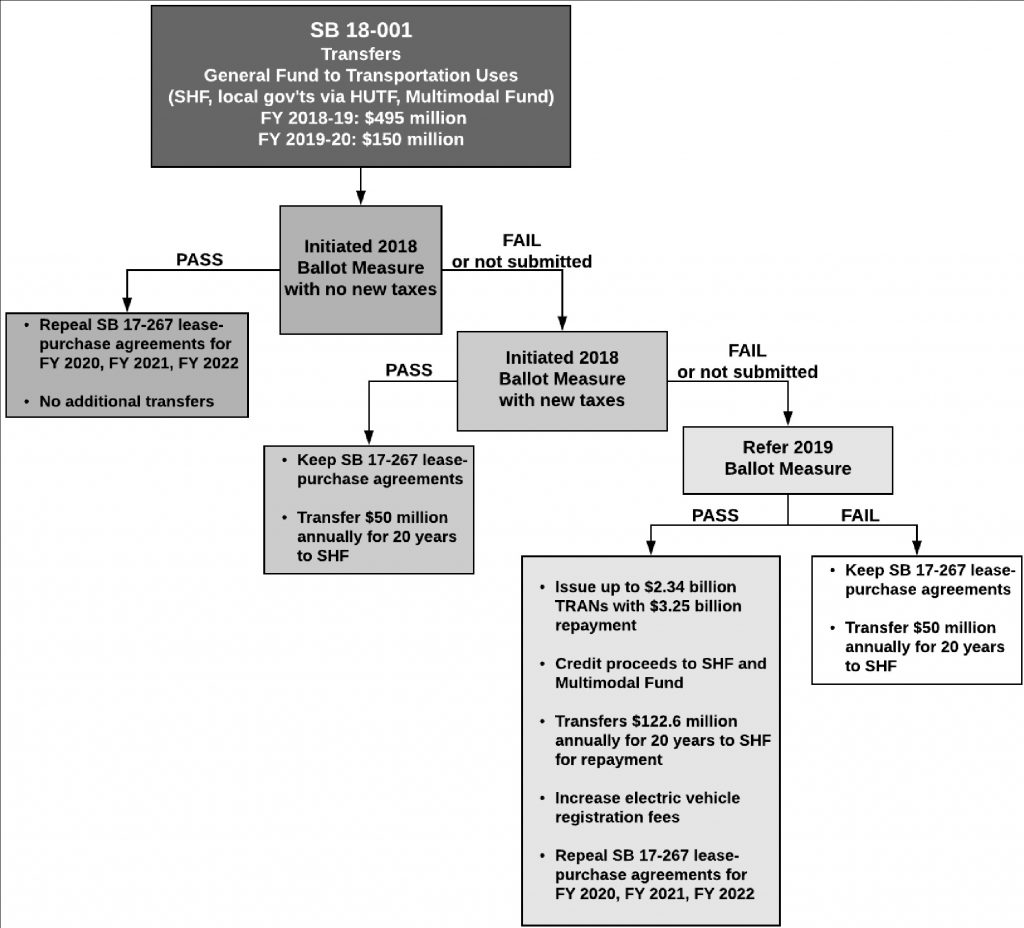 In brief, the compromise would send less money to roads than the Senate version advocated by that Chamber’s majority Republicans.  Voters would get chance to approve the sale of bonds to raise money largely for state roads.  Local governments and multi-modal purposes (mass transit, bicycle lanes, sidewalks, etc.) would receive less money than from the first House version of SB-1 approved by the House Transportation Committee last Thursday with a “strike-below” amendment.

This is the second time in two years that the two legislative leaders have attempted to broker a bipartisan compromise to increase transportation funding.  Last year, HB-1242 sought to create a stable, 20-year plan for transportation funding by increasing the state sales tax by 0.5 percent to 3.4 percent, which would issue $3.5 billion in bonds to fund transportation projects.  It dies in the Senate Finance Committee.

Last year, the legislature enacted SB-267, which allocated $100 million annually in General Fund revenue to pay off over four years up to $2 billion in equal amounts, or “tranches,” of State bond-like debt instruments called “certificates of participation” or “lease-purchase agreements.”

Whatever they are called, these instruments are essentially mortgages of State property that borrow money from investors with the dollars to be used for transportation projects.  Issuance of the instruments does not require voter approval.  Each lease-purchase agreement has a twenty-year term.

Of the $2 billion, $1.88 billion was reserved for CDOT, mainly for transportation projects known as “Tier 1” in CDOT’s ten-year development plan.  Tier 1 projects include such major projects as widening I-25 north to Fort Collins, widening I-25 between Castle Rock and Monument Hill and various projects on I-70 west through the mountains.

At least ten percent of the $1.88 billion was to be dedicated to transit projects by CDOT.  At least 25 percent of the money going to CDOT was reserved to counties with a population of 50,000 or less as of July 2015.

Here are the key elements of the compromise:

General fund dollars in the amount of $495 million in fiscal year 2018-2019, which begins July 1st, and of $150 million the following fiscal year will be allocated for transportation.

This $645 million one-time funding over two years will be split three ways:

In addition, the State this year will sell about $500 million of COPs—the first tranche–to jump-start CDOT work on state highways in 2019.

Next, the SB-1 compromise will do two things when it comes to bonding.

SB-267’s last three tranches of $100 million annually will be directed to repaying transportation bonds if approved by the voters in 2019.

Beginning in fiscal year 2020-2021, the compromise will add another $50 million annually of General Fund money to each of the three $100 million tranches.

This total of $150 million would then be allocated annually to pay off up to $2.337 billion in bonds that the voters would be asked to approve in 2019.  The maximum repayment over twenty years would be $3.25 billion.

This means that only an additional $470 million in bond revenue would be made available by the compromise above the original $1.88 billion envisioned last year by SB-267.

Of this possible $2.337 billion of bond revenue, 85 percent would go to CDOT for state roads and 15 percent to multi-model.  Under the compromise, however, local governments would not receive any funds from the sale of the bonds.

There is a catch, however, and the voters may never have a chance to vote on a compromise SB-1 bond question in 2019.

One of two citizen-initiated ballot measures may be on the November ballot.

First, a coalition effort led by the Metro Denver Chamber of Commerce, has filed five initiatives that would raise the state sales tax by varying degrees from 0.36 cents to one cent to pay off transportation bonds.

The legislature’s Democrats have called for a tax increase to provide long-term funding outside of the General Fund for transportation.  They have argued that earmarking a large amount of General Fund revenue to pay off transportation bonds would lead to deep cuts in education, corrections and social services when revenues drop during the next recession.

Second, the conservative Independence Institute is pushing a ballot measure that would force the legislature to take $350 million in General Fund dollars to pay off $3.5 billion in bonds.  This would be the Democrats’ worst nightmare because it would place education, corrections and social-service programs squarely on the fiscal chopping block when revenues fall during a recession.

Passage of a Citizen-Initiated Measure in 2018

If voters approve an initiated bonding measure this November, then the compromise SB-1 would not put a bonding question before the voters in 2019.

Instead, the $50 million of General Fund dollars would simply be directed to CDOT for maintenance of existing roads each year for twenty years.

This bill creates two years of transfers from the General Fund for transportation purposes and conditionally creates 20 years of additional General Fund transfers to the State Highway Fund.  If an initiated ballot measure authorizing state debt for transportation is not approved in 2018, this bill refers a ballot measure to do so at the 2019 election.  Conditional on approval of the 2019 measure, the bill requires the issuance of Transportation Revenue Anticipation Notes worth up to $2.337 billion. Executions of lease-purchase agreements under Senate Bill 17-267 for years beyond FY 2018-19 are conditionally repealed.  The bill conditionally increases state and local revenue from debt issuance and state expenditures for debt service over a 20-year term.

To fully understand the bill, read the Fiscal Note.

In 1999, Colorado voters approved a transportation funding proposal, Referendum A, by a 61 percent margin.  The measure authorized CDOT to borrow up to $1.7 billion by selling Transportation Revenue Anticipation Notes (TRANs), which had a maximum repayment cost to $2.3 billion.  State and Federal dollars were used to repay the bonds.  The funds were used for 28 prioritized projects, including the famous T-REX project on I-25 in south Denver and beyond.  In the end, CDOT issued $1.5 billion in TRANs with a total repayment of $2.3 billion.

In 2005, Referendum D, a measure to bond $2.072 billion, was defeated by the voters when it garnered only 49 percent of the vote.  The measure would have provided $1.7 billion for transportation projects.

For news media coverage of SB-1 and the transportation funding issue, read: