On Tuesday, HB-1178, whose title is “Concerning a Sales and Use tax Exemption for Qualified Property Used in Space Flight,” was introduced and assigned to the House Finance Committee.

Advanced by the CACI Tax Council, the bill is politically notable for its high-level, partisan support in both legislative chambers.

The House prime co-sponsors are Speaker Mark Ferrandino (D-Denver) and Minority Leader Brian DelGrosso (R-Loveland), who is a member of the Finance Committee.

CACI has learned that aerospace companies, which build space satellites and related equipment in Colorado, have decided to store and maintain their space property in other, more tax-friendly states.    The companies would like to store the equipment in Colorado, but because the state’s sales-and-use tax kicks in after 60 days, they have to take “title ownership” of the equipment, which then subjects them to the tax.

According to the bill’s legislative declaration, four leading aerospace-industry states states—Arizona, California, Florida and Virginia—already have exemptions similar to HB-1118.

“If we want to grow and support the aerospace community,” said Loren Furman, CACI Senior Vice president, State and Federal Relations, “then this is an opportunity that will make Colorado more competitive and bring more satellite vendors and jobs to our state.”

“In the competition for aerospace jobs with these four states, Colorado’s adoption of HB-1178 will level the playing field for aerospace companies,” Loren said.

CACI submitted a memo, written by CACI and DigitalGlobe, Inc., that detailed the policy rationale, especially the economic benefit to Colorado, for HB-1178.

“HB-1178 aligns with the recommendations of the Brookings report,” Loren added.

CACI has assembled a coalition of aerospace companies, business organizations and state and local economic development entities to support HB-1178, including the following CACI members:

The Legislative Council has not yet publicly issued a fiscal note for the bill.  Speaker Ferrandino, however, told The Denver Business Journal that the fiscal cost to the state of HB-1178 is projected to be $80,000 in its first year.  The reason that the cost is so low is because aerospace companies are building and storing their space flight equipment in other states instead of in Colorado.

Although the House Finance Committee has not yet scheduled the bill for a hearing, the Speaker toldThe Denver Business Journal that he expects it will be heard in late February.

Yesterday, the House and Transportation Committee amended and then passed HB-1065, the controversial, so-called “truckers’ bill,” which died in the legislature in 2008 and 2009.  The bill now goes to the House Floor for Second Reading debate and action.

The bill’s fiscal note states that “This bill prohibits a contract for the transportation of property from requiring that the customer release the motor carrier from all liability resulting from the motor carrier’s own negligent or intentional acts.”

The House sponsor is Representative Dominick Moreno (D-Commerce City), who told the committee that Commerce City is home to 100 trucking companies.  The Senate sponsor is Senator Mary Hodge (D-Brighton).

The eight Democrats on the Committee joined Republican Representatives Don Coram (Montrose) and Ray Scott (Grand Junction) to pass the bill on a ten-to three vote.

The bill has sharply divided the business community.  CACI is assessing the measure and seeking input from its members.  CACI has, as a matter of policy, historically opposed government intervention into legal contracts willingly agreed to between businesses.

The Colorado Motor Carriers Association (CMCA), which is a CACI member, is leading the charge for HB-1065.  CMCA President Greg Fulton and numerous trucking company executives testified for the bill.  A representative the Colorado branch of the National Federation of Independent Businesses (NFIB) also spoke in favor of the bill.

The American Trucking Association, through its state affiliates, has campaigned for a number of years to pass bills similar in other states to HB-1065.  The ATA’s Insurance Task Force (ITF) states the following: “Most notably, starting from only eight states a few years ago, state trucking associations, funded in many instances by the ITF, have now obtained motor carrier anti-indemnification laws in 35 of the states.​”

On the opponents’ side, the Colorado Petroleum Association (CPA), a CACI member, is leading the effort to defeat the proposal.  CPA President Stan Dempsey testified against the bill, along with Mark Barnes, a Shareholder with Brownstein Hyatt Farber Schreck, a CACI member.

A representative of the Metro North Chamber of Commerce, a CACI member, told the Committee that it opposed the bill.  The bill is opposed by the Colorado Competitive Council, which is an arm of the Metro Denver Chamber of Commerce, and the Colorado chapter of NAIOP, the Commercial Real Estate Development Association.  NAIOP is a CACI member.  Opponents also include CACI members in the retail, oil-and-gas and other natural-resource industries.

CACI members who wish to listen to the hearing can access the audio recording of the Committee’s session yesterday.

For legal analyses of this issue, read:

“The Increasing Role of Indemnity Agreements in Allocating Insurance Proceeds and its Effect on the Transportation Industry,” by Kenneth Goleaner, Senior Associate, Brown and James, St. Louis, Mo. 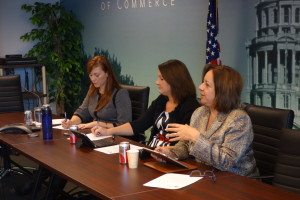 Yesterday, CACI’s HealthCare Council met for the first time this legislative session.  The Council was joined by Colorado Commissioner of Insurance Marguerite Salazar, as well as Jo Donlin, Director of External Affairs for the Division of Insurance.  Commissioner Salazar was appointed to her position in August of 2013.  Prior to the appointment, she served as the Regional Director for the U.S. Department of Health and Human Services, Region 8, as well as serving over 20 years as President/CEO of Valley-Wide Health Systems, a large rural Community Health Center in Southern Colorado.  Commissioner Salazar discussed her goals for the Division of Insurance, which prioritizes efficient management of the Division, establishing a level playing field, managing diverse interests and issues, meeting evolving demands, and ensuring accessible government.

The Council also reviewed several pieces of legislation, and voted to take active positions on two.  HB 1053 – Pediatric Dental Benefits by Rep. McCann and Sen. Aguilar will be supported by the Council.  The bill allows the Commissioner of Insurance to adopt rules to ensure that requirements for pediatric dental benefits are consistent regardless of whether the dental plan is purchased from inside or outside of the Colorado Health Benefit Exchange.  Confusing federal regulations on pediatric dental benefits have undermined market alignment in the states and led to market inefficiencies.  HB 1053 won CACI support because enables the state to address the problems that were created at the federal level, simplifying the regulatory scheme here in Colorado.

The Council voted to take an oppose position on HB 1108 – Copayments for Rehabilitation Services by Rep. Primavera and Sen. Tochtrop.  The bill prohibits cost  sharing for physical rehabilitation that exceeds cost sharing for primary care, as well as cost sharing that exceeds 20% of the total cost of the visit, and applies to services provided by physical therapists, occupational therapists, chiropractors, acupuncturists, and massage therapists.  CACI members expressed a number of concerns with the proposal, primarily that limiting cost sharing for particular services will cause premiums to increase.

The next Council meeting will be held Thursday, February 27, and Sen. Aguilar, Chair of the Senate Health and Human Services Committee, will be the guest speaker.

“Another try at rolling back Colorado renewable energy mandate is blocked,” by Cathy Proctor, The Denver Business Journal, January 30th.

New Online Services from Colorado Department of Labor and Employment

The Colorado Department of Labor and Employment has introduced a new online feature called The Employer Toolkit ( www.coloradotoolkit.com ) to help businesses interact more efficiently with the Division of Unemployment Insurance.

Businesses are required to submit wage reports and premium payments to the Unemployment Insurance Division and, historically, that’s been done in a labor intensive and snail-mail fashion. Today, with the Employer Toolkit, time and energy are being saved and efficiencies are being increased.

When an individual files for unemployment benefits, the Division of Unemployment Insurance requires all employers listed on the claim to submit job separation documentation. Employers can now do that via the Employer Toolkit by enrolling in the electronic job separation program, speeding up the process and ensuring more accuracy of eligibility decisions than ever before.

The Employer Toolkit is part of a growing trend toward a do-it-yourself approach to engaging with government, something the Colorado Department of Labor and Employment has long championed.

“In 2009, we introduced online services to assist unemployment claimants,” says Executive Director Ellen Golombek. “This web application is simply the next step in a continuous effort to do business in ways that better serve our customers. Greater customer service is our goal, whether those services are offered online or face-to-face.”

The following was written by Sue McGurkin, CACI Federal Policy Representative, who can be reached at 303.966.9641.

On Thursday of this week, the United States Chamber of Commerce and the National Association of Manufacturers launched its Partnership for a Better Energy Future (PBEF). CACI has signed on to be one of the Partnership’s original members and CACI is the Colorado affiliate for both the U.S. Chamber and NAM.

As described on the PBEF’s website, “The Partnership aims to educate and mobilize the broader business community and elected and public officials to address widespread concerns with forthcoming greenhouse gas rules. Its membership includes national groups representing businesses and consumers from all industries of the U.S. economy. This collection of diverse perspectives is united under a common interest in ensuring the Administration’s greenhouse gas (GHG) regulatory actions do not harm American jobs and the economy.”

In addition, as the primary focus of PBEF is on GHG regulations, the PBEF has six core principles  for such regulations and they are as follow:

CACI anticipates much action this year from PBEF, as the Administration’s Climate Action Plan is heavily engaged on the regulation of greenhouse gas and we will continue to keep you updated on the Partnership’s efforts.

For more information on PBEF; a list of members and how to join this group, please visit their website by clicking here. In addition, if you have any questions, please contact Sue McGurkin, CACI’s Federal Policy Representative at 303.866.9641.

On Tuesday of this week, the Environmental Protection Agency (EPA) hosted a webinar on its continuing study on the potential effects of hydraulic fracturing on drinking water.

Below are links from the EPA on this webinar and other resources related to their study:

Seminar information including presenter information may be found online at http://www.clu-in.org/conf/tio/frac9/

Seminar slides and other resources are available online at http://www.clu-in.org/conf/tio/frac9/resource.cfm

Feedback for the live webinar may also be submitted online at http://www.clu-in.org/conf/tio/frac9/feedback.cfm