Governor Tells CACI to “Keep the Pedal to the Metal” 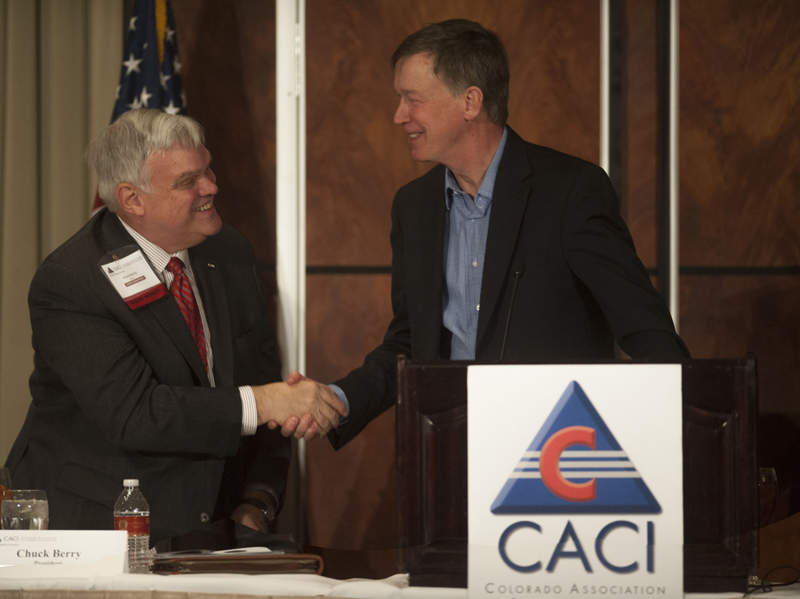 Yesterday, at the annual CACI Colorado Business Day Luncheon, Governor John Hickenlooper, the keynote speaker, told a crowd of 400 CACI members and guests at The Brown Palace Hotel that public-private partnerships are key to moving Colorado forward “so that it will be defined more by its future than its past.”

This was the Governor’s fourth straight address to CACI at its January Luncheon since he was elected in 2010.  The Governor is running for re-election this year.  In his CACI speech, he touched on a number of points that he made in his January 9th State of the State Address to a joint session of the Colorado House of Representative and the Colorado Senate.

Before he began his CACI remarks, however, the Governor first read verbatim a proclamation, which he had signed, designating January 23, 2014, as “Colorado Business Day.”  The CACI audience responded with a round of applause.

The Governor made a strong plea for private-sector leaders to take up government service, whether at the state or local government level.

Describing a partnership between CACI Gold Partner Lockheed Martin, which was the Platinum Sponsor of the Luncheon, and the Colorado Department of Labor and Employment, Governor Hickenlooper explained how qualified military service veterans were trained by Blackfox as electronic technicians.  Blackfox and Lockheed Martin worked together to develop the training curriculum to prepare the veterans to pass Lockheed Martin’s assessment tests.

The five-week training program is funded by the H1B Technical Skills Training Grant and the Veterans Workforce Investment Program.  The program, which began last fall, has graduated two classes of veterans, while a third class is currently undergoing training, according to information supplied to CACI by the CDLE.  Eleven of the 15 members of the first class were hired by Lockheed Martin on November 11th, Veterans Day.   Of the second class of 19, 16 have been hired by Lockheed Martin.  A third class of 23 veterans began their training on January 13th.  Finally, State Veterans Representatives have interviewed 101 more veterans for placement in upcoming training classes.

The Governor described a number of business and economic-development initiatives launched by his Administration, including the statewide grassroots effort in 2011 that led to the creation of the Colorado Blueprint, The Colorado Innovation Network (COIN), the Rural Economic Development Grant Program, the Advanced Industries Accelerator Program, a new Colorado “brand logo” and the “Pedal to the Plains” bicycle tour.

The Governor discussed in detail how he worked with Darrell Hanavan, president of the Colorado Wheat Growers Association, to successfully land last year the corporate headquarters of Ardent Mills, a joint venture of ConAgra Mills and Horizon Milling.

The Governor also made the following points:

In conclusion, the Governor urged CACI members to not “take the foot off the pedal” as the states’ economy recovers from the 2008-2009 recession but continue to build the state’s economic “momentum.”

Wage-Dispute Bill: Is the Third Time the Charm? 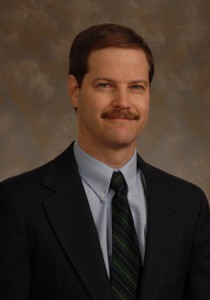 During the 2012 and 2013 legislative sessions, CACI and its business allies lobbied hard to kill the so-called “wage-theft bills” that sought to recover wages for workers from companies that had folded up shop.

The primary proponents of the bills during the three legislative sessions have been the Colorado chapter of 9to5, the National Association of Working Women and the Colorado Plaintiff Employment Lawyers Association.

CACI’s Loren Furman, Senior Vice President, State and Federal Relations, has worked with the bill’s sponsors since last summer to improve the bill to address the concerns of CACI and its business allies. Joining in her in this effort is Dan Block, Attorney at Law, Robinson Waters & O’Dorisio, P.C., a CACI member (pictured at left).

“We don’t have an official position yet, but we are getting close to neutral,” Loren told The Denver Post.

On Wednesday, SB-5 was heard by the Senate Judiciary Committee, amended and passed on a partisan three-to two vote, which sends the 21-page bill to the Senate Finance Committee.  SB-5 is sponsored by Representative Jonathan Singer (D-Longmont) and Senator Jessie Ulibarri (D-Commerce City.)

The amended version of SB-5 directs unresolved claims by workers over wages, benefits and vacation pay to the Colorado Department of Labor and Employment, which would then investigate and could issue orders for employers to pay workers and could cite the employers.

The decades-old Colorado Civil Wage Claim Act provides remedies for a worker or former worker who claims that an employer or former employer owes wages to that individual.  The CDLE can investigate such an assertion and determine penalties that the employee can only recover in court.   In other words, the CDLE’s Labor Division now cannot recover the penalties for the employees.  SB-5 would thus provide the CDLE with enforcement powers to investigate and levy penalties.

The fiscal note for last year’s “wage-theft” bill, HB- 1227, stated that the CDLE receives about 4,000 complaints annually about wage disputes.

Loren testified before the Committee and summarized CACI’s work on the proposal:

During the last two legislative sessions, CACI and its business allies strongly opposed the wage-theft bills because of an impasse on three critical issues:

Because the amended SB-5 no longer includes these three areas of impasse, the proponents and sponsors and the business community have made a lot of progress.  The amended version contains the following:

CACI members who have questions about SB-5 should contact Loren Furman, CACI Senior Vice President, State and Federal Relations, at 303.866.9642.

Stacey A. Campbell is a shareholder with the Law Firm of Littler, and focuses on employment litigation and employment policy issues.  He is a skilled national litigator with trial experience in both federal and state courts and has successfully first-chaired jury trials on discrimination, breach of contract and personal injury.

Stacey has litigated all types of employment discrimination cases, including those on race, sex, sexual harassment, pregnancy, disability and age.

In addition to his litigation experience, Stacey has represented companies in labor disputes, labor arbitrations, and union contract development and negotiation.

Stacey actively serves on many community and professional organizations, has received many awards and recognition for his for his work, and received his JD from the University of Kansas School of Law.

The prior chair of the Council was Sybil Kisken, Of Counsel, Davis Graham & Stubbs LLP.  CACI thanks Sybil for her service to the Council. 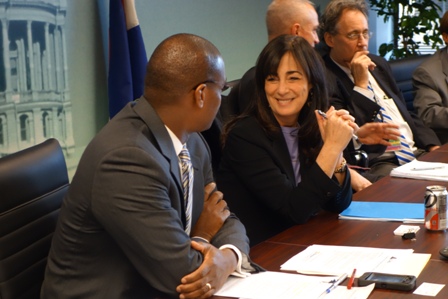 On Wednesday, three officials of the Colorado Department of Labor and Employment (CDLE) appeared before the CACI Labor and Employment Council. At right is Ellen Golombek, CDLE Executive Director, and at left is Stacey Campbell, Shareholder, Littler Mendelson, Chair of the CACI Council.  Ellen was accompanied by Paul Taurillo, Director of the Workers Compensation Division; and Pat Teegarden, Director of Policy and Legislation.

The Council discussed with the CDLE officials various issues and bills, including SB 5, “Wage Claims/Administrative Remedies;” the unemployment insurance system and the UI Trust Fund, a “rumored” mandatory paid-leave bill; and the workers’ compensation system and an effort by the AFL-CIO to change the system.  The Council voted to oppose a bill, not yet introduced, that would grant workers access to their personnel files. The Council voted to support SB-74, “Repeal Damages/Employment Discrimination Claims.”  Senate President Morgan Carroll (D-Aurora) assigned SB-74 to the Senate State, Veterans and Military Affairs Committee, which is known as her “kill” committee.

“Tax credit under fire from some in GOP,” by Ed Sealover, The Denver Business Journal, January 24th.

“Flare-up over rules turns into a political firestorm,” by Peter Marcus, The Colorado Statesman, January 20th.

The following was written by Sue McGurkin, CACI Federal Policy Representative, who can be reached at (303) 966-9641.

CACI sent a letter to each Colorado Senator requesting their support for patent reform that focuses on eliminating the abuse of the system by patent violators, otherwise known as “trolls.” CACI was approached by several member companies and organizations to weigh in with our Colorado Congressional delegation, as the Senate is likely to begin a debate on its own patent bill during 2014. The House passed its own version, House Bill 3309, the Innovation Act, by an overwhelming bipartisan vote of 325-91 the past December.

Even though Congress passed a patent reform bill a few years ago, it did not adequately address the issue of Patent Assertion Entities (PAEs), commonly known as “trolls” and how best to close the loopholes that allow them to abuse the system. As stated in the letter to our Senators, “The problem of patent trolls has gotten out of hand in our country.  It is stifling small business growth and costing America jobs, including many in the state of Colorado.” In addition, CACI pointed out that:

“According to a study from Boston University, frivolous patent suits cost American companies an estimated $29 billion in direct payouts in 2011. In 2012, patent trolls sued productive companies over 5,000 times, the highest number of suits ever recorded. Lawsuits filed by patent trolls have increased from 22% in 2007 to 40% in 2011.”

As such, CACI urged both Senators to “pass a bill that shifts legal fees, limits discovery and increases pleading standards.  These common sense steps represent a way that the patent system can be strengthened without jeopardizing the rights of legitimate patent holders.”

CACI will continue to monitor this issue and if you have any questions, please contact Sue McGurkin, CACI’s Federal Policy Representative at 303.866.9641.