“I feel that my input on the Enterprise Zone Reform task force helped shape Colorado policy. The Colorado Chamber and its partners did a great job involving me and then standing up for a reasonable outcome that was at risk until the very end when HB 1142 was passed.” 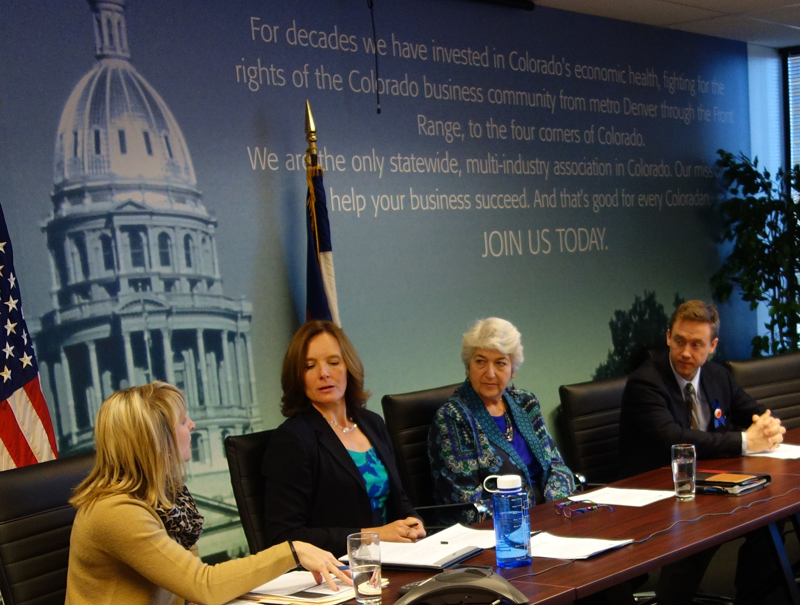 Senator Michael Johnston (D-Denver), chair of the Senate Finance Committee, right, and to his right, Representative Lois Court (D-Denver), who chairs the House Finance Committees, today discussed with the CACI Tax Council various tax-related bills that have been introduced, or are expected to be introduced, this legislative session as well as state fiscal policy and the efficacy of tax exemptions.  At left is Loren Furman, CACI Senior Vice President, State and Federal Relations.  To Loren’s left is Rhonda Sparlin, CACI Tax Council Chair, who is a Partner at RubinBrown.  The Council agreed to support HB-1014, the bipartisan Job Growth Incentive Tax Credit bill, which clarifies existing law.

“Hickenlooper: ‘Colorado does not shut down,’” by Peter Marcus, The Colorado Statesman, January 14th.

“Getting down to business at this year’s legislature,” by Marianne Goodland, The Colorado Statesman, January 14th.

“Rural energy bill up for debate again in Colorado,” by The Associated Press, The Denver Post, January 14th.

The following was written by Sue McGurkin, CACI Federal Policy Representative, who can be reached at 303.966.9641.

In an update to an article in last week’s Capitol Report, the Senate was unable to agree on a compromise regarding Senate Bill 1845, the Emergency Unemployment Compensation Extension Act; so at press time, there is currently no legislative vehicle to extend the federal unemployment insurance benefits that expired on December 28, 2013.

As reported, “The chamber voted 52-48 to reject a proposal to extend benefits through November and pay for it by extending the sequester’s mandatory spending cuts into 2024. A different measure to extend aid for three months — without a pay-for — was defeated 55-45.”

The issue is not entirely dead, as Senate Majority Leader Harry Reid (D-Nev.) did leave open the possibility that some other unemployment compensation extension bill could be considered quickly if there were agreement between both sides; however, at this point, an extension does appear to be unlikely.

CACI will continue to keep you updated on this issue and if you have any questions, please reach out toSue McGurkin, CACI’s Federal Policy Representative at 303.866.9641.

Members of a business and organization coalition, led by the US Chamber and included the CO Retailers, sent the following letter to House Judiciary Chairman Robert Goodlatte (R-Va.) last week requesting that the House take action on the Marketplace Fairness Act. Despite House Judiciary Chairman Goodlatte releasing policy principles of such a bill late last year, it is still uncertain if the House will move on this; this is particularly true since Goodlatte has been vocal about not supporting the bill that passed the Senate in a bipartisan vote since in his view, it hurts small businesses and creates another tax.

By way of background, the Senate passed the Act this spring with overwhelming bipartisan support and as noted in the earlier Capitol Report article:

“The Marketplace Fairness Act grants states the authority to compel online and catalog retailers (“remote sellers”), no matter where they are located, to collect sales tax at the time of a transaction – exactly like local retailers are already required to do. However, there is a caveat: States are only granted this authority after they have simplified their sales tax laws.”

CACI will continue to monitor this bill and if you have any questions, please contact Sue McGurkin, CACI’s Federal Policy Representative at 303.866.9641.

On behalf of the undersigned businesses and organizations, we are writing to start off the New Year to urge immediate action on legislation to create marketplace fairness and make the 2013 holiday shopping season the last where Main Street businesses must compete at a government-created price disadvantage. The recent decision by the United States Supreme Court to decline granting certiorari for two cases that challenged a New York State statute only highlights the need for Congressional action. We applaud your “Basic Principles on Remote Sales Tax” principles released on September 18 and now urge you to turn these principles into legislative language and make this issue a top priority for the Judiciary Committee in 2014.

In the 1992 Quill Corp. v. North Dakota case, Justice John Paul Stevens wrote that “the underlying issue [of whether remote sellers should be required to collect sales taxes] is not only one that Congress may be better qualified to resolve, but also one that Congress has the ultimate power to resolve.” More than twenty years later, the Court’s recent refusal to revisit the legal question, ironically announced on Cyber Monday, reaffirms their 1992 direction that this is an issue that Congress must address.

Online shopping is popular with consumers and sellers alike. The rapid growth of e-commerce should benefit online sellers as well as Main Street businesses that also sell online. However, the special treatment of remote sellers distorts this market and puts many local brick-and-mortar businesses at a competitive disadvantage. IBM Digital Analytics Benchmark reports that online shopping this Cyber Monday leapt by 20.6 percent over last year. This incredible growth underscores the importance of Congressional action to ensure government tax policy does not disrupt basic free market competition.

Legislation that levels the playing field while establishing important protections for businesses and consumers will ensure a healthy and competitive marketplace for decades to come.  We believe it is crucial for Congress to address this problem this year to protect millions of jobs.  And, as Dr. Art Laffer’s recent study found, when Congress fixes this problem it could help create 1.5 million new jobs and generate $563 billion in GDP growth in the next decade.

In closing, we appreciate the deliberative manner in which you have addressed the issue of how to modernize our sales tax collection system for the digital economy, and we urge you to make legislating on this issue a top priority for your Committee by moving a bill in early 2014.  We stand ready to work with you and your staff to help translate your seven guiding principles into legislation that will provide meaningful simplifications for remote sellers and create a level playing field for all retailers. Thank you for your leadership on this and many important issues to our economy and country.

The Supreme Court is poised to hear several controversial cases this session and one of particular interest to the business community held opening arguments earlier this week. The case is National Labor Relations Board v. Noel Canning, which involves a Washington state bottling company that lost a “dispute with its local Teamsters union over pay that was regulated by the NLRB. Because the board that sided with the union contained three members who were approved by recess appointment, the company – along with many of the country’s top Republicans – are challenging the ruling. Three federal appeals courts sided with Noel Canning.”

In addition, it was recently reported,

“At issue in the case is whether President Obama legally appointed three officials to the National Labor Relations Board (NLRB) using recess appointments, the term used when the president approves someone for an executive branch position – a process that normally requires confirmation by the Senate – while senators are out of town. The Supreme Court will examine whether the president can make appointments during recesses that occur during a regular Senate session or only during the once-a-year breaks that occur between sessions, and whether the position that is being filled must have been vacated during the same break in order for the president to use a recess appointment.”

Also, the case before the Supreme Court is a rarity, as the “Court has never had reason to play referee on the issue before and has no precedent to rely on. While the current battle is between Obama and Senate Republicans, the tension has existed equally when a Republican has occupied the White House and Democrats objected to his appointments.”

More to come on this issue, as the case moves through the process. It should be noted that the National Association of Manufacturers (NAM) and United States Chamber of Commerce were parties to this case and CACI is the Colorado affiliate for both organizations.

A United States Appeals Court for the District of Columbia Circuit overturned the Federal Communications Commission’s (FCC) net neutrality rules of 2010 that were designed to ensure broadband service providers, such as Verizon, AT&T, Time Warner Cable and Comcast, preserved the openness of the internet. The court did still confirm that the FCC has the authority to issue such rules; however, the FCC failed to utilize proper legal arguments for them. Therefore, it is anticipated that barring an appeal to the Supreme Court, the FCC will re-write the net neutrality rules.

Quoting directly from the Court’s ruling that further explains their 2-1 decision:

By way of background for more explanation of a complex issue,

“In 2011 after the FCC’s rules were published and set into action, Verizon Communications challenged those rules in court, arguing that the FCC had no authority from Congress to impose such rules and that the rules stymied its First Amendment rights.

On Tuesday, the federal Court of Appeals for the DC Circuit ruled in a 2-1 decision that even though the FCC has the authority to regulate broadband access, it based these rules on a flawed legal argument. In other words, the FCC based its Net neutrality regulation on a law that does not apply to broadband providers.

FCC Chairman Tom Wheeler stated the following after the decision was rendered:

“I am committed to maintaining our networks as engines for economic growth, test beds for innovative services and products, and channels for all forms of speech protected by the First Amendment,” he said. “We will consider all available options, including those for appeal, to ensure that these networks on which the Internet depends continue to provide a free and open platform for innovation and expression, and operate in the interest of all Americans.”

CACI will continue to monitor this issue and if you have any questions, please contact Sue McGurkin, CACI’s Federal Policy Representative at 303.866.9641.

“Why you should care about Net neutrality (FAQ),” by Marguerite Reardon, CNET, January 15th.