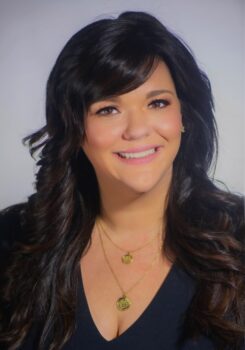 Katie Wolf Perkins joined the Colorado Chamber in November 2020 as the Director of State Governmental Affairs, bringing over a decade of government affairs and lobbying experience.  Over the years, Katie has established herself as a well-respected, bi-partisan lobbyist and has earned the admiration of her colleagues and Colorado’s legislators as an honest broker and incredibly hard worker.

Prior to joining the State Chamber, Katie was founder and CEO of Wolf Public Affairs, a successful contract lobbying firm serving clients in healthcare, business, criminal justice. Katie began her career in politics as a Legislative Aide, staffer to the Majority Caucus in 2006 and eventual full-time lobbyist and Senior Associate with Michael Best Strategies and Mendez Consulting.  Katie also worked for Senator Michael Bennet’s successful 2010 statewide Senate campaign and Colorado’s 2008 Obama for President Campaign. She has managed campaign strategy and fundraising for campaigns on both the state and federal level, branded and re-branded clients at the Colorado State Capitol, advised on long-term political and legislative strategy, and developed political giving entities and plans.

In her free time, Katie enjoys camping, karaoke, and watching Broncos football.  She also serves on the Board of Directors as the Treasurer for the BlueFlower Fund (Dec.  2012-Present), and serves on the Board of Directors for Strive Prep Professionals (August 2018 – Present).  She holds a Bachelor of Science degree in Political Science from the University of Colorado at Boulder.