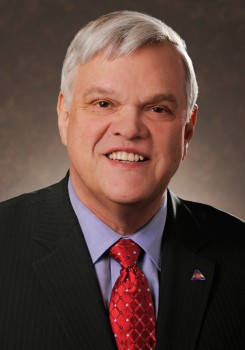 CACI President, has headed CACI since mid-2000.  Prior to that time, Berry served as a member of the Colorado legislature for 14 years (1985-1998), and for eight of those years (1991-1998) Berry served as the Speaker of the House, being elected four times by his legislative colleagues to the most powerful position in the Colorado General Assembly.  Berry was first elected to the legislature in 1984 to represent House District 21 in Colorado Springs and El Paso County.

Berry practiced in 1995-2000 as Special Counsel with the law firm, Holme Roberts and Owen in both the Colorado Springs and Denver offices.  In January 1981, Berry was appointed El Paso County Attorney by the Board of County Commissioners, and he served in that position until his election to the General Assembly in 1984.  Berry earned a B.A. (Magna Cum Laude) from the University of Colorado in 1972 and a J.D. from the CU School of Law in 1975.  After being admitted to the practice of law in Colorado in 1975, Berry was appointed a deputy district attorney for the Fourth Judicial District (El Paso and Teller Counties) and began his career as a criminal prosecutor in that office.